Polimark is a premium WordPress Theme for Linoor is a premium Template for Digital Agencies, Start Ups, Small Business and a wide range of other agencies.

The Death of a Not Very Old Dog… 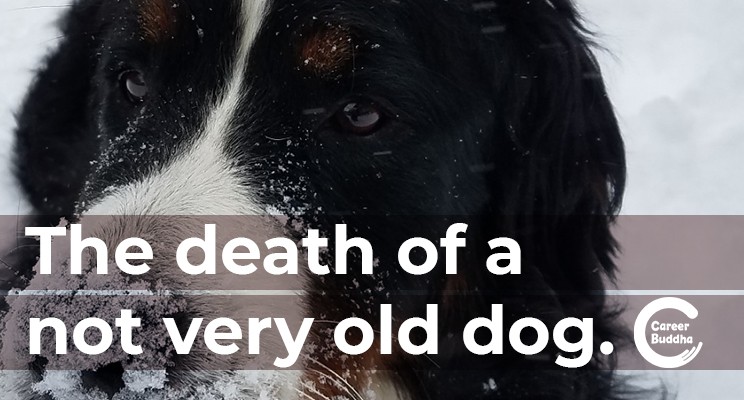 He had started life off on a rough footing. One of a dozen pups rescued from a puppy mill, his abdomen was filled with worms. He was abandoned and probably abused.

We got him from the local dog club which was looking to place the pups. Our previous dog, also a Bernese had died the year before and we were just nosing around, talking about the possibility of taking in a rescue dog. That a rescue puppy might become available was never something we thought possible.

But suddenly we found ourselves face to face with this scrappy little survivor. He was a mess, but we loved him instantly.

He pooped and peed in the back of our forester on the way to our home, so freaked out was he.

But over time he got more settled and quickly became part of our lives. He loved basking in the sun in our front yard and barked angrily and vociferously at any dog that dared walk by. Yet in the house he was the least likely protector, often allowing strangers to knock on the door without so much as a yelp.

We named him Gatsby because he came from humble beginnings, but had, we hoped, a glorious future. But Bernese Mountain Dogs are called a “heartbreak breed” because they often have health challenges – hip issues, digestive problems and an unpleasant tendency towards cancer.

Gatsby thrived in our home. He usually hid when we had guests over, but over time he would cautiously come downstairs, sniff at the hands of guests at the dining table and then scamper away. He had lots of energy for a Bernese and never grew larger than most Bernese females. So we called him the “sport model” because he was lean and fast, roaring around the dog park, chasing and being chased by other dogs much larger than he.

But a dog who is afraid of his own farts is going to have challenges – as entertaining as they sometimes were.

At age 6 he developed a very nasty dog version of Irritable Bowel Syndrome. He started losing weight, his appetite waned and he squeezed out some nasty diarrhea — the kind you can’t really scoop up, so you just end up mushing it around with a bag and then covering it with leaves, hoping no one else sees this.

Christmas morning that year I was the first one up, and padding into the living room with a few last minute presents I discovered something very unpleasant under the tree — and I don’t mean a gift from Santa. Gatsby had lost it – from both ends — all over the rug right in front of the Christmas tree. The sensation of stepping in it is a sensation I hope never to experience again.

But after a moment of angry disgust, my emotions turned to concern. Our little guy must be really sick.

We found a great internist and after a bunch of expensive tests and medicines, Gatsby stabilized. He regained his old vigor, and although he never was the dive bomber at the dog park he once was, he remained a happy dog.

A week or two ago he just lost interest in his food. Dogs are not like humans, they can happily eat the same stuff every day with the same enthusiasm on day 500 as on day one. But not for Gatsby. We switched him to a high value meal – boiled chicken and white rice. But after a few days he lost interest in that too.

Blood tests and urinalysis showed no obvious cause. But he became more listless – older really. Until one day he just wouldn’t eat anything. That got us really concerned so we set an appointment for an ultrasound with his internist for the next day.

But the night before his appointment I got a call from my wife while I was at the grocery store buying pre-made salads for our dinner. “Come home immediately!” she yelled. “Gatsby is dying!”

No, he couldn’t be. I had just walked him earlier that day. Yes, he seemed weaker, but dying? No way!

We rushed him to the local emergency vet, but it was too late. He was gone. My wife had chanted our Buddhist chant softly into his ear and stroked him, telling him we loved him.

I know that people who don’t have pets think pet lovers are crazy. They can’t understand why pet owners get so broken up when their animals die. “They’re just animals!” they say.

But these furry bastards burrow their way into our hearts. They become part of our family, our daily routine, our lives.

Around the same time, a friend lost her battle with cancer. She left two young children and a husband.

We had lost our dog. My friend’s husband had lost his life partner, her kids had lost their mom.

There are many kinds of loss in the world and as many ways to grieve them.

As I remember Gatsby, my friend, and so many others I have known who have passed away – many unexpectedly, others after a long, rich life, I think about how unknowable so much of life is.

One day you are romping around the dog park, the next you are breathing your last.

So what can I offer you as a takeaway from this story?

The great teacher Nichiren said something profound in this regard that I hold dear. It is to live each day with the spirit that “now is the last moment of your life.” One could write a whole book about this concept and in fact, my teacher, Daisaku Ikeda has written such a book – Unlocking the Mysteries of Birth and Death.

Living each day with the spirit of valuing each moment as if it is my last, has wrenched me back into the present, into an awareness of this single moment, which is both irreplaceable, sublime, and sometimes crazy-making.

Life is full of ups and downs. We don’t know what will happen tomorrow, or even later today. All I can do is find meaning in each moment, for these become the memories I will cherish when friends depart.

I have no idea where Gatsby, my friend, or everyone else I have known who has died may be today. Heaven, hell, nothingness, nirvana, reincarnation — you can take your pick, because as of today, no real proof is evident.

But I take comfort in the deep knowing that how one has lived, how one has conducted oneself, that is the best indicator of what state we might be in after death. If there is any continuity from this life into the next plane of existence – if there is one — my heart and intuition tell me that it is free of bodily suffering and yet some kind of continuation of the causes we have made in this life.

And while I like the concept of reincarnation as proposed in Buddhist philosophy, I sure can’t prove it. So if, after I die, I do come back into this world to learn new lessons, complete unfinished business, or start a new adventure, please be nice to me in the dog park — whichever end of the leash I may be on.

Wishing you total success and fulfillment.